Scotland is not only famous for its incredible scenery, warm and welcoming people, and varied wildlife – its also boasts a rich history of fine traditional Scottish drinks, enjoyed in numerous styles!

Almost every corner of Scotland claims to have its own brewed or distilled Scottish drink, and many beverages have been produced for hundreds of years. When on a Scottish cruise, you will have the chance to sample an array of the drinks on offer – here’s a few favourites to give you a taste of the traditional Scottish drinks you might enjoy on your Highland travels…

Delightfully unusual, this traditional Scottish drink that is made from egg yolks, sugar, rum and cream was once served at the breakfast table of Shetland lairds. Best drunk with a square of shortbread on the side, this tipple is a great option for those who enjoy a spot of afternoon tea.

Another rum-based Scottish drink, this punch came about during the time that the city was trading with the West Indies in the nineteenth century. Historically, the punch (concocted using sugar, lemon, lime, rum and water) was served at the Pig Club, the place at which wealthy aristocrats met and networked.

Combining the traditional Scottish drink, whisky, with some boiling water, a teaspoon of sugar and a twist of lemon peel – this warming hot toddy is a sipping drink that is sure to keep the colds at bay.

The authentic recipe for this traditional Scottish drink has been lost – it was said that the last man who had the recipe jumped from a cliff to avoid disclosing what was in the liquor! Although these original ingredients will never be truly known, the current recipe still dates back 300 years.

Made with the delicious whitecurrants and mixed with lemon rind, ginger essence and whisky, this is a beautiful Scottish drink that sings with the flavours of Scotland. After the liquid has been left in an air tight jar for 2 days it is strained and mixed with sugar, then bottled and corked. Once it has been left for three months, it’s ready to enjoy!

For help in planning your Luxury Barge Cruise, contact a member of our cruise team, order a brochure or visit our Special Offers to further inspire your wanderlust…

A Guide to River Shannon Cruises 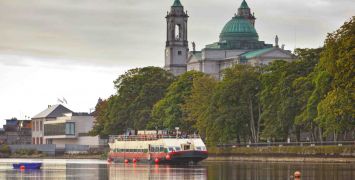