A Slice of Italy in France: the Château d’Ancy-le-Franc 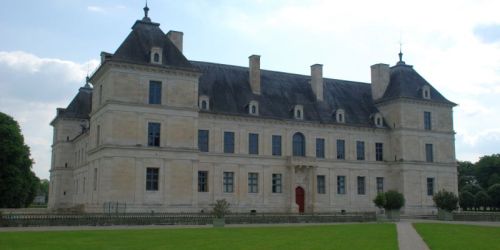 There are a number of rambling, historical châteaux in Burgundy, built as strongholds to protect the inhabitants of the region. However, the breathtaking Château d’Ancy-le-Franc, stands apart from the tradition; it was constructed less as a stronghold and more as a status symbol.

The first thing that strikes you when visiting the château is the symmetry of its stunning stonework. This is the hallmark of seminal Renaissance architect, Sébastiano Serlio, who had worked on the Palace of Fontainebleau for King François I before being commissioned to design Ancy-le-Franc. He was the author of an influential treatise and a highly respected master of architecture during the Renaissance period. Unfortunately, he died in 1554 before the palace was completed, but his designs were faithfully followed by his successor.

Residing in the centre of a beautiful park on the banks of the Canal de Bourgogne, the palace is built on a perfectly square footprint, featuring a vast central courtyard. The exterior is imposing in scale but relatively reserved in decoration; the lavish tastes of its owners, the Dukes of Burgundy, only become apparent when you step through the grand front door.

The château also owes its astounding decor to an Italian with an eye for artistry. Francesco Primaticcio was working on the Palace of Fontainebleau when he was recruited to design the interior of Ancy-le-Franc. Under his curation, the château accrued the largest collection of Renaissance murals in the country, featuring works by Nicolo dell’Abbate, Nicolas de Hoey and Primaticcio himself. Visitors can still marvel at these masterpieces today and highlights include the Pharsalia Gallery, with its 100 foot cameo, and the sumptuously decorated Diane’s Chamber.

See It for Yourself

Our classic cruise aboard La Belle Epoque offers the opportunity to visit the elegant Château d’Ancy-le-Franc. If you would like to find out more about this itinerary, don’t hesitate to get in touch with one of our friendly sales team.